For over 10 years, the IAE awards the title of the IAE Prize Laureate, awarding the Large Gold Medal. In 2007, new awards were additionally founded:

The order “Engineering Glory” of the International Academy of Engineering

The order “Engineering Glory” was established by the resolution of Presidential Council of the International Academy of Engineering on March 21st, 2007.

At the heart of the order “Engineering Glory” there is adistinctive five-pointed star withdivergent beams, placed onto the rusticated pentacle decorated by precious stones and cut girdle in the interbeam space of the star. The beams of the star are rusticated in the imitation of “silverdrops”. In the center of composition there is a medallion with the emblem of International and Russian Academies of Engineering rimmed with precious stones deposits. Beneath the lower beams of the star there is a red ribbon with the inscription “ENGINEERING GLORY”.

The wholemedal is made of precious metals. The order’s height is 40 mm, width is 38 mm. By means of the claw and suspension ringthe upper part of the pentacle is attached to a rectangular suspension brooch with a blue silk clouded ribbonof 19 mm width.

On the reverse side there is a four-line inscription “INTERNATIONAL ACADEMY OF ENGINEERING” and “No. ___”.

The Gold medal of the International Academy of Engineering

On the obverse side, bounded by the rim there is an image of the star “ENGINEERING GLORY” with bright blue space between parallels and meridians on the medallion. At the bottom of the medal parallel to the rim there is a protuberant inscription — “ENGINEERING GLORY”. The reverse side, bounded by the rim has a three-line protuberant inscription “INTERNATIONAL ACADEMY OF ENGINEERING” and a laurel branch below it.

The medal made of yellow metal is attached to a rectangular suspension brooch with a blue silk clouded ribbon by means of the claw and suspension ring. The diameter of the medal is 30 mm. 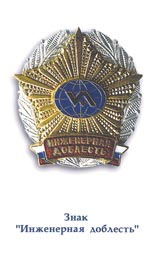 The sign “Engineering Valor” of the International Academy of Engineering

The sign “Engineering Valor” represents the star made of yellow metal placed on the laurel wreath of white metal. The star is presented in the form of the beams coming from the center. Interbeam space of the star is rusticated in the imitation of “silver drops”. In the center of the star there is a medallion with the image of the official emblem of the Russian Academy of Engineering. The space between parallels and meridians of the medallion is bright blue.

The lower beams of the star are covered with a dark red ribbon with a two-line inscription “ENGINEERING VALOR”. The unwinding ends of the ribbons are made in the Russian tricolored flag: blue, white, red.

The star, the medallion and the ribbon are made of yellow metal. The sign’s height is 35 mm, width is 32 mm.