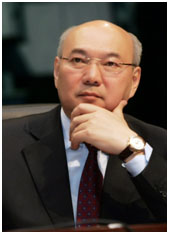 Bakhytzhan T. Zhumagulov is a prominent scientist in the field of applied and computational mathematics, development and application of information technologies, mathematical modeling and mathematical methods in resolving the hydrodynamics problems and practical issues in the oil and gas industry. He is the author of over 400 scientific papers and 11 monographs published in Kazakhstan and in foreign countries, and of 8 textbooks.

In 2003, Bakhytzhan T. Jumagulov was elected as a Member of the “Otan” Party Bureau;  since 2007 he has been elected as a Member of the Political Bureau of “Nur Otan” national democratic party. In April 2005, H.E. Nazarbayev N.A., Chairman of “Otan” Party, appointed him as an Acting Chairman of “Otan” Republican Political Party. In 2005, he headed Republican Public Headquarters of Mr. Nursultan Nazarbayev, Republic of Kazakhstan Presidential Candidate. In 2007 he was appointed as a First Deputy Chairman of “Nur Otan” National Democratic Party, was elected as a Deputy, Deputy Chairman of the Parliament Majilis, Republic of Kazakhstan, and Leader of “Nur Otan” National Democratic Faction in Majilis.

In April 2008, by Republic of Kazakhstan President’s order Mr. Zhumagulov was appointed as a Rector of Kazakh National University named after Al-Farabi. Under his leadership, an entirely new University Development Strategy was elaborated and implemented, serving for the qualitative changes in the training of specialists, increase of their competitiveness, and upgrading of Kazakhstan education to the European standards for the integration into the Bologna process purposes.

Bakhytzhan T. Jumagulov’s active participation in the management and activities of these international organizations provides for effective integration of the scientific and engineering corps of the country into the world community, serving for the strengthened cooperation between the countries in this important area, enabling NEA RK to obtain the status of the authoritative international engineering-and-research center of Central Asia.

Bakhytzhan T. Jumagulov has been awarded with the “Parasat” Order, “For Distinguished labor”Medal, USSR Medal “For Distinguished labor”, and with Honorary Diploma of Kazakh SSR Supreme Soviet. He has received Letters of appreciation issued by the country President, H.E. N. Nazarbayev. He was awarded with the highest-level mark of the National Democratic Party “Nur Otan Altyn Belgi” No. 002. For his special merits in the development of science and engineering, he was awarded the highest international award – “Engineering glory” Order. He is bearer of quite a number of other awards and honorary titles issued by Kazakhstan and international organizations.

The journal “Bulletin of the National Engineering Academy of the Republic of Kazakhstan” has been published since 1997 and is published 4 times a year at the end of each quarter.

The journal “Bulletin of the NEA RK” by order of the Chairman of the Committee for control in Education and Science of the Ministry of Education and Science of the Republic of Kazakhstan dated as of 10.07.2012 no. 1082 is included in the list of publications, recommended by the Committee for publication of basic scientific results by candidates of scientific degrees in Doctor of Philosophy – PhD, Doctor in the following courses:

The purpose of the “Bulletin of the National Engineering Academy of the Republic of Kazakhstan” issue is the popularization of scientific achievements of scientists, including scientific editing and monitoring of the most important results of the research and developments by Kazakhstani and foreign scientists, the analysis and the formation of scientific publications on the priority areas of science and technology in the areas mentioned above.

Editor in chief -famous scientist, academician B.T. Zhumagulov, President of the National Engineering Academy of Kazakhstan. Members of the editorial board are the prominent scientists and organizers of science in Kazakhstan and countries of near and far abroad, who perform peer review, analysis, discussion, selection and formation of materials for publication of the research and development results in the journal by scientists not only in Kazakhstan but also in Russia, Belarus, Ukraine, Azerbaijan, Tajikistan, Serbia, and other countries.

The journal for many years is a kind of chronicle of the National Engineering Academy of Kazakhstan, highlighting the work carried out during the General Meetings, meetings of the Presidium, international congresses, conferences, round tables, it signifies the state of research in different areas of fundamental and applied science.

The journal is included in the International English-language abstracts’ data base on engineering science INSPEC.