On October 16-17 including October 29-31, 2019 in Moscow, on the basis of Federal State Budget Educational Establishment Kosygin Russian State University (Technologies. Design. Art) there was successfully held the II International Kosyginsky Forum, within the framework of which there were held 4 International Scientific and Technical Symposia under the common theme “Contemporary Tasks of Engineering Sciences”. The forum was dedicated to the coming 100th anniversary of the University.

The symposium was organized by the International and Russian Academies of Engineering in collaboration with A.N. Kosygin Russian State University. 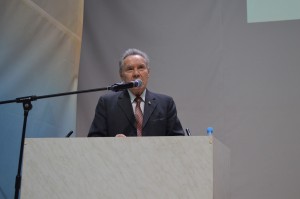 Based on the results of the symposium there was published a collection of works (14 pages) which includes more than 50 outstanding reports made by symposium participants. The electronic version of the collection is available on several websites such as the websites of IAE, RAE, as well as University and Symposium.

On October 29-31, 2019 with the participation of the International and Russian Academies of Engineering, Kosygin Russian State University, Russian Academy of Sciences, Russian Union of Scientific and Engineering Public Associations, Russian Chemical Society named after D.I. Mendeleev, Kurnakov Institute of General and Inorganic Chemistry of the Russian Academy of Sciences, Eurasian Information and Analytical Consortium, Lykov Heat and Mass Transfer Institure, National Academy of Sciences in Belarus, Moscow School of Economics, Lomonosov Moscow State University, and with the participation of other scientific organizations as the real sector of economy there were held the following symposia:

The collection of Plenary Reports

The collection of works _ Volume 1_Symposium 1 >>

The collection of works_ Volume 2_Symposium 1 >>

The collection of works_ Part 1_Symposium 2 >>

IAE and RAE President, RAS Corresponding Member Boris Gusev was a member not only of the governing bodies of the symposia, but also moderated the first one on October 16, 2009. He also made a scientific plenary presentation at the first meeting of the Forum’s Plenary session. About 100 representatives from various  IAE and RAE departments and offices took an active part in the plenary and other sessions of the symposia, including:

The scientific reports and presentations made by the members of the Russian Academy of Sciences have become a distinguishing feature of the Symposium “Contemporary Engineering Problems of Key Industries” emphasizing longstanding partnership with IAE and RAE, among them:

IAE and RAE Members made more than 200 reports. Among the participants of the forum there were scientists and engineers representing not only state and public academies of Russia but a number of other countries, as well as specialists whose long service and achievements were highly appreciated (winners of State Prizes, Governmental Awards of the Russian Federation in the field of science and technology and other meaningful awards).

Kosygin Russian State University engaged its students and postgraduate students, currently studying or doing research in sciences, to which results and achievements the reports and presentations of the symposia participants were devoted.

The Presidium of the IAE Presidential Council and RAE Presidium thank the administration and employees of Kosygin Russian State University for the organization and holding of the forum as well as all participants of the symposia for the active discussion of engineering problems at the present life stage of our country. It is planned that the subsequent International Kosygin Forums will be held in an even more organized manner and will engage more colleagues from the IAE and RAE departmnets and offices.

The given information was heard and approved at the Presidium meeting of the Presidential Council on November 6, 2019.