On September 20, 2018 in Taipei  (Taiwan) there was held the awards ceremony of Tang Prize laureates in which Boris Vladimirovich Gusev, the President of the International and Russian Academies of Engineering, member of the Tang Prize International Committee took part. 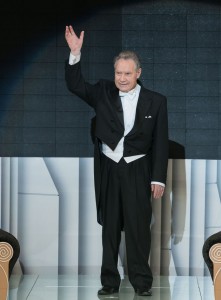 Against this backdrop, Dr. Samuel Yin established the Tang Prize in December 2012 to encourage individuals across the globe to chart the middle path to achieving sustainable development by recognizing and supporting contributors for their revolutionary efforts in the four major fields of Sustainable Development, Biopharma- ceutical Science, Sinology, and Rule of Law. The Tang Prize is global in reach, with laureates selected on the basis of the originality of their work along with their contributions to soci­ety, irrespective of their nationality or ethnicity. 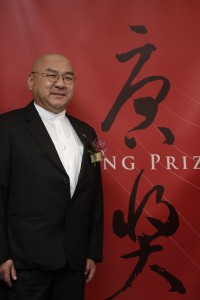 Rooted in the long-standing cultural traditions of Chinese philosophical thought and in an outlook of convergence and mutual enrichment with other traditions, the Tang Prize aims to provide fresh impetus to first-class research and develop­ment in the 21st century, to bring about positive change to the global community, and to create a brighter future for all humanity.

The Prize has been given every two years since 2014. The fund of each nomination is about 1 360 000 USD, and additional grants for further research are about 340 000 USD, the total amount for winner is about 1,7 million USD.

Read more about the Tang Prize >>

The following scientists and researchers have become the 2018 tang Prize laureates:

Dr. James E. Hansen and Prof. Veerabhadran Ramanathan are recognized for their pioneering work on climate change and its impact on the sustainability of the earth. Their works lay the scientific foundation for such international actions as the Paris Climate Agreement and the new global development – Agenda 2030.

Dr. James E. Hansen has been at the forefront of advancing scientific understanding of the climate change phenomenon as well as a pioneer on numerous fronts related to sustainability. He was the first to compile temperature records from around the world and was the first to detect the greenhouse warming signal as it emerged above the noise (natural variability). Indeed his publications in the 1980’s warned the world of intense storms and extreme weather – events which we have witnessed and experienced around the globe in the past decade. 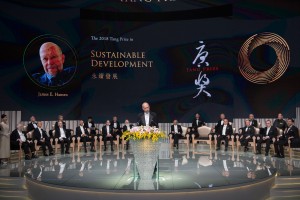 Professor Veerabhadran Ramanathan was the first to point out the very significant greenhouse effects of chlorofluorocarbons (CFCs). In 1975, Prof. Ramanathan discovered the greenhouse effect of halocarbons, particularly chlorofluorocarbons (CFCs) used in such applications as refrigeration and manufacturing. In 1985, using these models and his deep insights into the properties of various gases, he with other colleagues shined light on “non-C02” greenhouse gases – a concept that is now widely acknowledged.

In conclusion, of more value than just scientific interest, their works help us understand how certain human activities harm climate and environment and forms a scientific foundation for action. 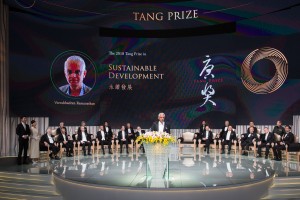 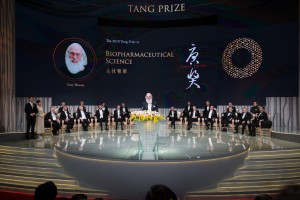 Dr. Brian Drukcr, Director of Oregon Health Sciences University Knight Cancer Institute, is the physician scientist who led the successful clinical trial of imatinib (Gleevec®) on chronic myelogenous leukemia (CML), which opened up the field of TKI as targeted therapy. Dr. Druker’s contributions are in both the development and application of Gleevec, which was the first successful example of tyrosine kinase-targeted therapy by small molecule inhibitors.

Dr. John Mendelsohn, President Emeritus of MD Anderson Cancer Center, took another approach while at UC San Diego working with Dr. Gordon Sato. An alternative way of shutting off the activities of tyrosine kinases on the cell surface (receptor tyrosine kinase) is to develop antibodies against the extracellular domain of the receptor. In such a way, the natural ligand (e.g., growth factor) can no longer bind, thus the receptor tyrosine kinase is no longer activated. They conceived the idea that antibodies targeting epidermal growth factor receptor (EGFR) may be an effective strategy for cancer treatment. 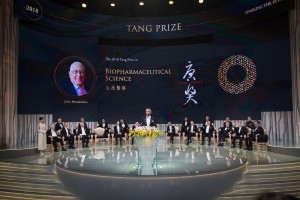 The discovery of protein tyrosine phosphorylation and tyrosine kinases sowed the seed for research in the ensuing forty years and has led to a thorough understanding of the fundamental principles of cell growth and cancer development. The develop­ment of tyrosine kinase-targeted therapies has fundamentally changed the practices of cancer clinics. It provides great benefits to patients who suffer from this dreadful disease and gives hope that cancer can eventually be treated.

Stephen Owen, former Harvard University Professor (retired April 2018), has over four decades written about, translated, and trained students to read Chinese literature. Owen has done as much as any scholar of his generation to introduce the riches of the Chinese literary tradition to Western readers both scholarly and popular, to reflect upon its contribution to the world’s literary heritage, and to revolutionize the way it is read. The single most important scholar of Chinese Classical poetry in the late twentieth and early twenty-first centuries, Owen has published on virtually every period of Chinese literature, though his original focus, as well as the field to which he has made the most decisive contributions, is Tang poetry. This, however, in no way limits his contributions to Tang poetry alone — he has also written widely in other literary fields, and has translated impor­tant writings in both prose and poetry. Across his many works, he brings not only penetrating Sinology, but also a breadth of com­parative applications and theoretical sophistication that have made his scholarship unique worldwide. 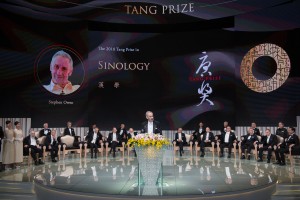 Yoshinobu Shiba, retired professor of the University of Tokyo and now executive librarian of the Toyo Bunko, has over the last half a century greatly expanded and taken the field of Chinese social-economic history to unprecedented heights of sophistica­tion. Until the 1960s, historians viewed China’s history—and especially its economic history—through the lens of Western frameworks of historical change, the Marxist one in particular. The most potent challenges to this methodology of viewing China were voiced by Japanese historians. Shiba has in the last almost seven decades paved the way with his contributions that proffered an innovatively insightful understanding of how civili­zation developed in East Asia. He tendered original and pioneer­ing insights into changes since the advent of the Song Dynasty in areas ranging from the rise in production, division of labor, com­mercial development and its impact in China, and even East Asia; his contributions weave a rich and dynamic tapestry of history, demonstrating the complexity within, while also offering a method, a lens for us to take a glimpse into not just the history of China but our world as a civilization as a whole. 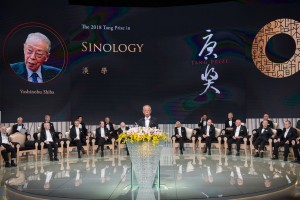 Joseph Raz, one of the foremost legal philosophers of our time, is recognized for his path-breaking contribu­tions to the rule of law, and for deepening out under­standing of the very nature of law, legal reasoning, and the relationship between law, morality and freedom.

An acute, inventive, and energetic thinker and writer, Raz has made major contributions in every area in analytical legal, moral, and political philosophy. Through rigor of thinking and analysis, he dissects complex and abstract legal concepts into clear-cut methodologies fit for general application, shedding light on fundamental aspects of perennial issues relating to the source and normativity of law, the idea of legal systems, the nature of authority, autonomy, and liberalism. He has more recently extended his key ideas to contemporary questions in democracy and human rights, bringing out new aspects which emerge only after thorough analysis.

Fearless of diving into the murky world of political theory, human nature, and the very nature of law, Raz connects ethical explorations of the relations between practical reason and the theory of value into the realm of rule of law and perfectionist liberalism; further engaging issues such as the legitimacy of difference, the intelligibility of value, reasons and normativity generally. Raz’s writings are widely studied and provide an invaluable source for anyone working in legal, moral and politi­cal philosophy. 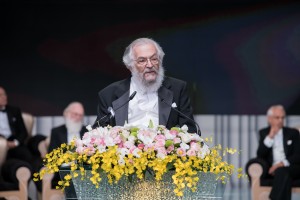